The ability to engage in productive dialogue is one of the most important skills for thriving in the 21st century. The skills of productive dialogue enable us to resolve conflict through non-violent means, empower us to participate in democratic processes and equip us to become collaborative agents in the on-going process of knowledge production.

At a time when political discourse often degenerates into head-butting, where social media reinforces shallow conversation and instant gratification, and where a growing culture of entitlement replaces robust arguments with slogans, learners can benefit from meaningful opportunities to co-create the rules for productive dialogue and hold each other accountable to following them. In particular, the criteria for mutually beneficial disagreement are crucial. They also need to recognise that whatever rational rules they may have agreed to, power dynamics can exclude or distort particular voices and points of view.

Our experience of dialogue with others also models dialogue with our own inner voices, enabling reflection and self-awareness – and our critical engagement with the digital world.

MindBurst is always looking for innovative ways of creating learning experiences that are meaningful to young people and that motivate them to engage.

We wanted to emphasise that dialogue, in the classical Socratic sense, is not an antagonistic debate in which there are winners and losers, but a process in which all participants work together towards a solution. In such a dialogue, there need to be ways of keeping all participants on board and meaningfully involved, while generating a worthwhile understanding of the topic being discussed. This requires that the participants respect each other (but the participants do not necessarily have to respect each other’s opinions). While rules cannot generate this respect on their own, they can create a context in which the possibilities of respect can be explored, reinforced and nurtured over time.

The broad structure of the workshop

The main principle in this exercise is that different groups of learners (while observed by the rest of the class) take turns discussing the same topic but with different rules. The rules act as a constraint and produce very different effects in the dialogue. In a short space of time learners can experiment with different rules and see their effects.

While one group of learners is in dialogue the rest of the learners observe silently. Once the dialogue is brought to an end the observers are given an opportunity to comment on what they observed – the content and quality of the dialogue as well as the group dynamics. The group that was in dialogue then get to respond or share their insights.

Ideally this exercise is done with an inner circle for the dialogue and an outer circle for critical comments. This is sometimes referred to as the fishbowl technique. Because we were working in a tiered auditorium, we arranged the chairs so that there were 7 chairs in a semicircle in front of the class.

This exercise is just the first step towards a more comprehensive discussion on maintaining critical and creative dialogue.

We invited two awesome guests, Paul Dachs and Sihle Hato, from Directors of Thought (DOT), a young hip hop group that tackles social issues and attempts to raise awareness through their music. They were, as our learners put it, “amaze-balls!” DOT is sadly no longer together, but while they were they worked with us to create a track on critical thinking:

Our other valued guest was Kyle Ferguson who filmed the event.

We opened the exercise with the question:

What are the most effective rules for dialogue, the ones that really help everyone to participate in the process of getting to the bottom of things?

Or, put more comprehensively on their hand-outs:

What rules (principles, or guidelines) can we construct
to maintain a dynamic and generative dialogue (conversation)
in which the participants are encouraged to explore and share ideas concerning a potentially controversial, difficult and very sensitive subject?

(A long question like this is complex and has to be unpacked before it can be understood. Concepts like “dynamic” and “generative” have to be made clear.)

Learners were asked to write down the rules they thought would work best. They then continued to do this all through the lesson while they were experiencing the different examples of rules.

We gave the following examples of rules for dialogue, just to give them a clearer sense of what we were asking for:

With each rule the group of learners who were in dialogue changed.

Rule 1: You cannot talk. You can only sing or rap.
The facilitators in the spotlight

The first group consisted of all the facilitators (Gabor, Tanya, Alan, Paul, Sihle and Andre) so that we could model the experience for them. Our guest facilitators, Paul and Sihle, got the flow going with the rhythm, intelligence, compassion and humour of freestyle hip hop.

We were not all talented singers or rappers so it also gave the learners an opportunity to see us being vulnerable, making them more willing to try.

More importantly, this served as an unexpected, fun and engaging way of starting the dialogue about dialogue. The element of surprise!

Rule 1: You cannot talk. You can only sing or rap.
The learners show us how it’s done 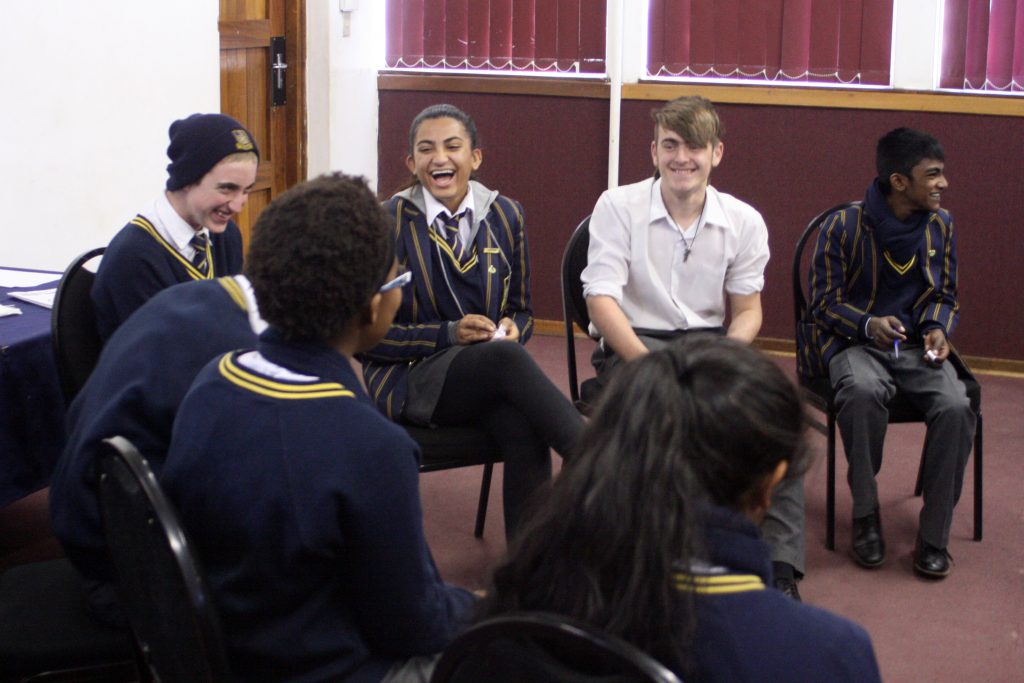 We then asked learners to volunteer for this group, as we didn’t want to force anyone to sing. We were genuinely surprised by what emerged. One class in particular really got a conversation going, surprising us all with their intelligent spontaneity.

Learners now had to make a clear connection between what they were saying and what the speaker before them had said.

After the dialogue we asked learners to compare this group’s performance with the one before. Learners pointed out the fact that this rule “slowed down” the flow and the creativity that had characterised the freestyle hip hop, but made people more deliberate in their participation.

They understood the value of this rule as forcing you to listen and engage what the other speakers were saying, instead of just pushing your own ideas or speaking over someone else.

This dialogue also provided an opportunity to talk about the power of the word “but”. Learners commented that the word “but” was a way of negating the thing you pretended to agree with initially. We spoke about experimenting by replacing the word “but” with the word “and”.

In one class a learner said that they were frustrated at not being able to disagree more immediately. After this comment we asked the next group to follow a rule we improvised in response to that conversation.

Daniel Dennett’s synthesis of Anatol Rapoport’s guidelines for successful critical commentary, from Dennett’s Intuition Pumps and Other Tools for Thinking (2013).

Improvised rule: “I disagree completely with you.”

This worked wonderfully. What emerged was that the dialogue of the group who disagreed vehemently degenerated quickly into a debate in which there could only be winners and losers. This debate generated less depth and insights than the preceeding group’s dialogue.

Rule 3: Stand when you speak. You may not stand if someone else is standing. Try limit the time you speak so others get a chance.

Here was a rule that focused on protocol, rather than attitudes or words. It had a very different effect as the seated learners could not interrupt each other and had to wait for their chance to stand up.

What was really interesting was that some learners saw this as creating respect for the speaker while others saw it as patronising the non-speaker. One learner was very emotional in her insistence that she didn’t like people speaking down to her. As an analogy we discussed whether you could interrupt a preacher during a Sunday sermon and what that implied.

With this rule, people tended to perform to the audience rather than communicate with the other members in the group.

The learners who were observing were asked to catch out anyone who broke the rules. This role was embraced with enthusiasm.

When someone was caught using one of these words, they had to stop talking and another learner in the group had to continue the dialogue.

Learners slowed down their speaking even further, trying to monitor each word they were using. “I” and “but” caught them out a few times.

Learners identified ways in which all these words can diminish the depth of a dialogue in different ways.

To get this exercise to work well the dialogue topic has to be provocative and controversial. One of the topics we chose was: “Is poverty my problem?”

We feel it is important to engage learners in dialogue and critical thinking with sensitive and emotional questions like these. Too often critical dialogue is taught in distant abstraction. While the principles of critical dialogue may be understood when taught this way, if the learners are going to incorporate them into their daily lives they need to be able to apply these skills in emotional, controversial and relevant contexts.

Guidelines for a conversation between diverse points of view

Here follows an example of a negotiated list of rules for a dialogue. This list was developed in 2008 with a group of academics from the humanities at Wits University. It is the result of an exercise that challenged them to create a list of guidelines for conversations that “get the most out of diversity.” Here is the result:

Suppose we were able to share meanings freely without a compulsive urge to impose our view or conform to those of others and without distortion and self-deception. Would this not constitute a real revolution in culture?

– David Bohm, in his book Changing consciousness: exploring the hidden source of the social, political, and environmental crises facing our world (1991) 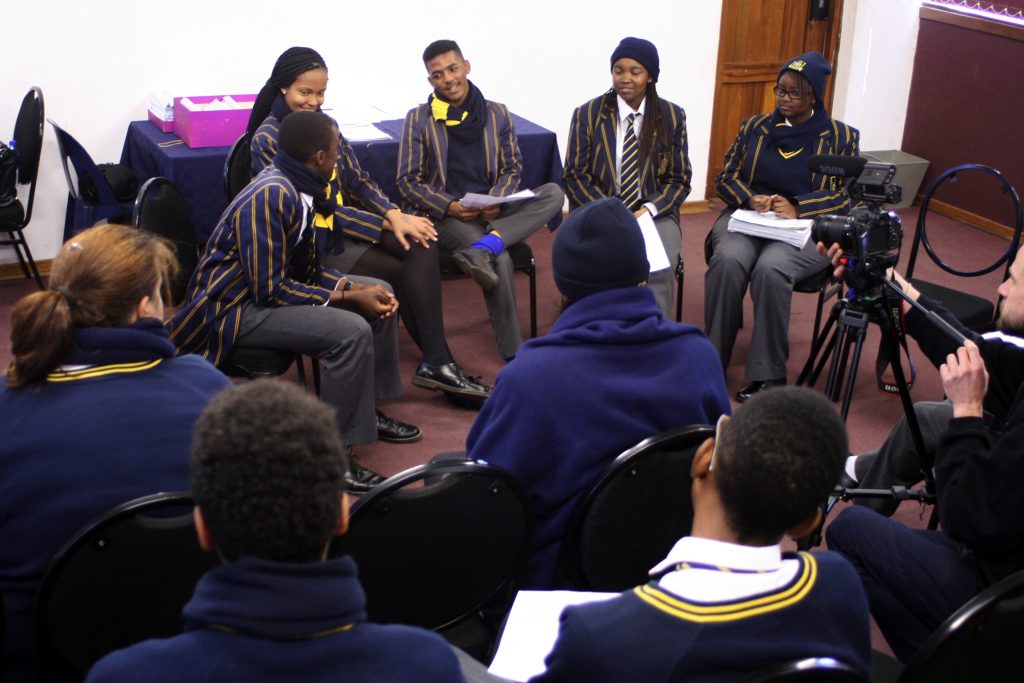